Switzerland's strengths
Moving to Switzerland with your family: things to know
Advantages and opportunities of opening a business
Switzerland as an international platform
Ticino, Swiss precision, Italian style
Interested in personalized advice?Get in touch!
Thank you! Your submission has been received!
Oops! Something went wrong while submitting the form.

A strong country, an international platform for companies wanting to grow and open up to new markets, an ideal place to live with your family.

The strengths of Switzerland
A small country in the center of Europe, in just over half a century Switzerland has build an incredible reputation that has led this small state to stand out and excel on a global level.

1 - The Swiss Confederation – history of a neutral country
It took centuries for Switzerland and its constituent territories to form the country we know today. Over time, Switzerland has evolved from an alliance of autonomous states to a modern federal state. Swiss history was strongly marked by the Reformation and the wars between Catholics and Protestants that followed.

The most recent history dates back to the end of the 18th century when revolutionary France occupied Switzerland and established the Helvetic Republic, a centralist state based on the French model. Internal unrest soon erupts and French troops re-enter the country. In 1803,the so-called mediation act was signed in Paris: on the initiative of Napoleon, the Helvetic Republic returned to being a Confederation of Cantons (19 of them at the time). At 1815 Congress of Vienna, the European powers recognized Switzerland as a country of perpetual neutrality. Valais, Geneva and Neuchâtel join the Confederation. The borders of Switzerland become what we know as Switzerland today.

With the 1848 Constitution, Switzerland became a modern federal state with a bicameral government and parliament.

The 20th century saw important changes at political, economic and social levels. In terms of internal politics, the country gradually passed to a multi-party system. From its origins as an agricultural country, Switzerland became an industrial country, with a higher number of immigrants than emigrants and with a marked increase in the standard of living. With the development of export activities, the relationship with Europe and the rest of the world also changed. From a political point of view, Switzerland confirmed its neutrality by refraining from active participation in the two world wars, but neutrality was always the subject of heated discussions.

After the Second World Wartechnological progress and economic growth advanced at a very rapid pace, bringing material well-being with it. Switzerland, thanks to its image as a neutral state, managed to position itself on world markets as a major player in numerous fields, becoming the most competitive economic center in the world but also distinguishing itself for diplomacy, humanitarian commitment and international cooperation.
‍

2 - Strategic geographic position
t borders Germany, France, Italy, Liechtenstein and is located right at the center of Europe. You can easily reach the main European capitals such as Frankfurt, Munich, Paris, Lyon, Turin, Milan, all within 300km.

Switzerland is divided into three geographical areas. The Alps represent about 58% of the territory, the Plateau about 31% and the Jura about 11%. Switzerland has 49 peaks taller than 4000m The Alps occupy most of the country, but only 11% of the population lives in this area. Only 7.5% of the entire Swiss territory is occupied by settlement areas. 40% is represented by agricultural land. 30% is made up of forest and wooded areas.

Sandwiched between the Alps to the south and the Jura to the north, Switzerland is the crossroads of European cultures and languages.  There's no other country that offers so much variety in such a small space. But it is also an international hub of people and goods between north and south of Europe, and between east and west of the world. 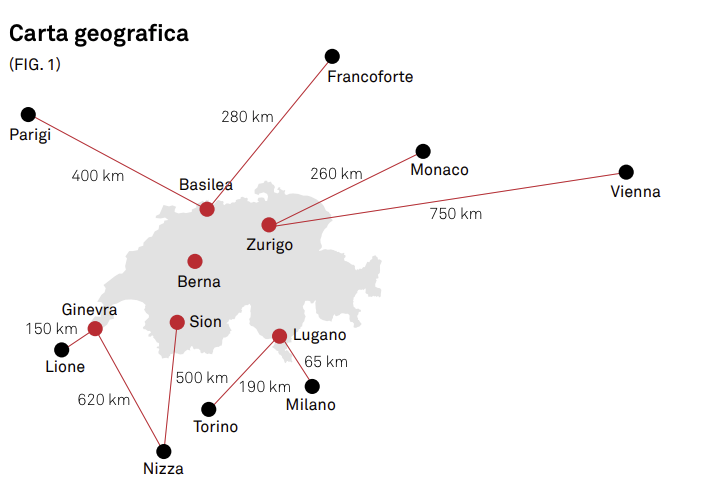 3 - Stable and reliable political government
The Swiss political system attaches great importance to freedom of action which is expressed through federalism and direct democracy. The capital of Switzerland is Bern.  In Switzerland there are three political levels: Confederation, Cantons (26) and Communes (2250).  at each of these levels, the legislative, executive and judicial powers are in the hands of distinct authorities. The people, thanks to direct democracy, can directly intervene in the management of the State through the right to elect their own representatives, the referendum and popular initiative. They are the only people in the world to have such high rights to express themselves.

Multiple studies on safety, social cohesion and political stability rank Switzerland above other countries in the world. Despite the cohesion of different ethnic, linguistic and cultural groups, internal stability is always maintained in a sort of "shared social peace".

4 - Cosmopolitan and international society
In Switzerland, 25% of inhabitants are foreign citizens, a symbol of tolerance and openness, with the presence of numerous linguistic and religious groups, in a very cosmopolitan environment. Most Swiss speak 3 national languages (German, French, Italian), while in the commercial and entrepreneurial sphere, English is becoming a widespread language throughout the territory, especially among newer generations.  This cosmopolitan environment makes it easy for foreign companies wanting to do business in Switzerland. 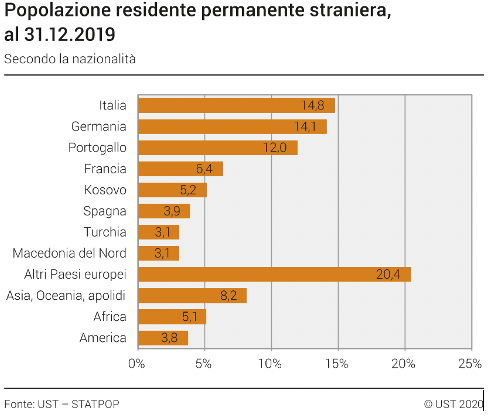 5 - Liberal economic structure
Switzerland is one of the most liberal and competitive economies in the world, with a very active network of international relations. A land "of clear and secure law" that guarantees investors certainty and long-term vision, supported by a very limited bureaucracy. Switzerland ranks among the top places in the world in terms of GDP per capita, which is around CHF 85,000 and derives mainly from the service sector (about 70%) and the remaining 30% from exports.
Small and Medium-sized Enterprises (SMEs) play a dominant role in the Swiss economic structure. Over 90% of businesses employ fewer than 250 people.
Switzerland has one of the lowest public debts in the world at 104 billion Swiss francs, which represents 27% of the GDP.
Unemployment rate is 3%, holding steady over time, and considered a normal and physiological value of the labor market. The Swiss economy is strongly export-oriented.
Europe is the most important trading partner, where Germany is the most important supplier and customer, followed by Italy and France
Switzerland has one of the greatest interconnections with world markets, where direct investments abroad and towards Switzerland amount to over 1500 billion Swiss francs, making it one of the top 15 countries in the world for direct investments abroad.

6 - Capacity for innovation
Switzerland invests over 3% of its GDP into research and development (international record). Switzerland has over 60 universities which are connected with industry through a continuous exchange of knowledge and technologies, guaranteeing the highest level, and promoting innovative start-ups. Numerous international companies recognize Switzerland for its excellence in innovation by establishing their research activities, such as pharmaceutical groups like Roche and Novartis, or successful companies such as Google and Disney. Furthermore, the system of intellectual property protection of trademarks, patents, designs and copyrights is very effective, with the result that in 2019 almost 8000 new patents were filed, which, when compared to the number of inhabitants, puts them in number one position.
For these reasons, Switzerland also attracts many qualified researchers who settle in centers of scientific excellence such as CERN in the field of physics and PSI (Paul Sherrer Institut), centers of scientific excellence integrated into the European and international co-operation network.

7 - Excellent infrastructure system
Thanks to a dense network of transport and road, rail and air links, Switzerland has always been synonymous with efficiency for the movement of people, goods and services, guaranteeing an excellent infrastructure of distribution. Switzerland has one of the most developed road networks in the world (1840 km of national roads and 250 tunnels). The railway system also represents Swiss excellence, culminating in the new Alptransit project completed in 2016 which, with the addition of a 57km long tunnel, reduced travel times between north and south by 30%, with the ambitious goal of transferring over 50% road transport to rail by 2026 (10 years). Zurich Airport is one of the main hubs for air transport of people and goods, and is always appreciated for its high level of service, welcoming over 30 million passengers and 500,000 tons of transported goods.

8 - Solid financial and capital market
Purchasing power among the highest in the world and stable currency (Swiss franc) represent the symbol of economic and monetary stability in Switzerland.
Those looking for capital can find a favorable investment climate and a network of serious and fair lenders. The Swiss stock exchange in Zurich (SIX Swiss Exchange) is among the most solid and recognized in the world which allows companies to access the international capital market.
Swiss Asset Management has ancient roots, recognized and appreciated all over the world, accounting for about ¼ of the entire world's wealth.
The Swiss National Bank (SNB) acts as guarantor for the whole system, also representing a source of wealth (2020 profit was 21 billion Swiss francs) which is partly redistributed to the Confederation and the Cantons (4 billion CHF in 2020). The control and strict supervision of the system are entrusted to FINMA, the Swiss Financial Market Supervisory Authority. The major centers of financial expertise are Zurich, Basel, Geneva and Lugano

9 - Advantageous taxation
The Swiss tax system has always been considered a successful model, based on three levels (confederal, cantonal and municipal) and is among the most advantageous for corporate taxation at an international level. The average taxation of companies is about 17%, but each Canton has the right to manage this financial leverage by adapting it to its own strategies, highlighting a significant difference in some cases. Example: 11.9% Canton of Zug / 19% Canton of Ticino / 21% Canton of Zurich
On 1.1.2020 a tax reform came into force that by 2023 will lead to a reduction in the tax burden for companies in the highest taxed cantons and to greater uniformity, with the aim of settling on average at 15% (required rate from the OECD). Double Taxation Agreements (DTAs) ensure companies avoid double taxation in cross-border businesses. VAT is 7.7%, the lowest in Europe.
Relations between taxpayers and tax authorities are characterized by a constructive and pragmatic approach, guaranteed by an efficient and flexible system.

Moving to Switzerland with your family: things to know